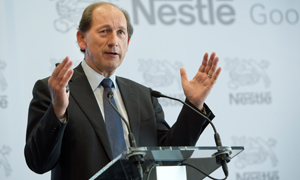 STRATEGIC PRIORITIES: Mr Bulcke is one of two new co-chairs of the CGF.

The Consumer Goods Forum (CGF), the global, parity-based network for the consumer goods industry, today announced it has elected two new Co-Chairs: Dick Boer, CEO of international retailing group Royal Ahold, and Paul Bulcke, CEO of Nestlé. The pair will replace outgoing co-chairs Muhtar Kent of The Coca-Cola Company and Gareth Ackerman of Pick ‘n’ Pay. In addition, Denise Morrison, CEO of Campbell Soup and Gareth Ackerman have been appointed as Vice Co-Chairs of The Forum. Today’s announcement was made following the meeting of the CGF Board of Directors in Tokyo.

As Co-Chair of the CGF Board for the last three years, Muhtar Kent has been a major force in setting the direction of the organisation. Under his chairmanship, the CGF created its manifesto, including its vision and key principles. Mr Kent is a vocal advocate on the importance of the collaboration between the private and public sectors together with civil society in order to accomplish real change, what he describes as the “Golden Triangle”.

Mr Kent represented the CGF at the past B20 summits and the climate change conference in Cancun. Gareth Ackerman, who served as the retail Co-Chair for the past 12 months, has played an instrumental role in helping to shape the CGF of today, namely in overseeing the success of the CGF’s annual, flagship event – The Global Summit.

Dick Boer has been CEO at Ahold since 2011, with a career in retail spanning more than 30 years. Mr. Boer was formerly Vice Co-Chair at CGF.

Commenting on his election, Dick Boer said: “Ahold has been working with the CGF for many years, and we are honoured to now be involved at such a high level. The CGF is uniquely positioned to drive the vision of the industry and encourage real change. Its ability to bring companies together for the good of our customers makes the work of the CGF both relevant and important. I am looking forward to contributing to the CGF’s international practices and to encourage the need for collaboration across all levels of the CGF membership”.

Paul Bulcke has been Chief Executive Officer of Nestlé since April 2008, and has had a career of over 30 years with the Group in many countries and continents.

Commenting on his election, Paul Bulcke said: “The Forum is even more important in these pivotal times of economic and societal changes where our industry plays a substantial role and touches a vast number of people. There are many challenges in society today and we have to define priorities to work together in collaboration with the multiple stakeholders in order to bring sustainable solutions. I am looking forward to serving the Consumer Goods Forum that is growing in importance, for “better lives through better business.”

Both Mr Boer and Mr Bulcke emphasised their gratitude to Mr Kent and Mr Ackerman for their outstanding contribution to the CGF over the past years, and thanked them on behalf of the Board for their exceptional leadership.

The Forum was created in June 2009 and is governed by its Board of Directors, which includes 50 manufacturer and retailer CEOs and Chairmen. The Forum provides a global platform for knowledge exchange and initiatives around five strategic priorities – Emerging Trends, Sustainability, Safety & Health, Operational Excellence and Knowledge Sharing & People Development – which are central to the advancement of today’s consumer goods industry.

The Forum’s vision is: “Better lives through better business”. To fulfil this, its members have given the Forum a mandate to develop common positions on key strategic and operational issues affecting the consumer goods business, such as providing consumers with healthier choices, and with more information on the company’s products and services. 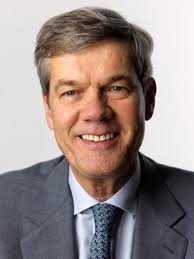 Dick Boer became Chief Executive Officer of Royal Ahold in March 2011. Prior to that date, Dick served as Chief Operating Officer Ahold Europe, to which he was appointed on November 6, 2006.

Prior to joining Ahold, Dick spent more than 17 years in various retail positions for SHV Holdings in the Netherlands and abroad and for Unigro N.V.

Paul Bulcke has been CEO of Nestlé Group since April 2008.

Born in Roeselare, Belgium, Mr Bulcke graduated from the University of Leuven with a degree in commercial engineering, followed by a postgraduate in the Vlerick Management School.

After a brief period as a financial analyst with Scott Graphics International in Belgium, Paul Bulcke joined the Nestlé Group in Vevey, Switzerland, in marketing, in 1979.

Over the next sixteen years he held various positions in marketing and sales, and as division head, in Peru, Ecuador and Chile, before taking CEO positions in Portugal, the Czech and Slovak Republic, and Germany.

In July 2004, Paul Bulcke joined the Nestlé Executive Board as Executive Vice President with responsibility for Zone Americas, where he played a decisive role in transforming this region into the Group’s largest and most profitable zone.

In April 2008, with a career of almost 30 years with the Nestlé group, Paul Bulcke was appointed Chief Executive Officer.

Nestlé S.A. is the world's leading Nutrition, Health and Wellness Company. Its mission of "Good Food, Good Life" is to provide consumers with the best tasting, most nutritious choices in a wide range of food and beverage categories and eating occasions, from morning to night.

The Company was founded in 1866 by Henri Nestlé in Vevey, Switzerland, where the headquarters are still located today. Nestlé has operations in 194 countries around the world, 468 factories in 86 countries and 339 000 employees. Nestlé sales for 2012 were CHF 92.187 bn.