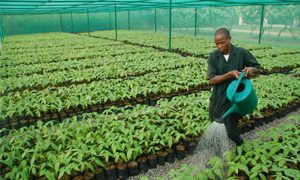 Nestlé’s work to help cocoa and coffee farmers adapt to environmental challenges has been recognised as an example of best practice by the United Nations’ Framework Convention on Climate Change (UNFCCC).

The company believes one of the best ways it can support farmers in preserving crops vulnerable to the effects of climate change is by training them to alter their production methods while improving the impacts of their activities.

Nestlé has been invited to share details of the agricultural assistance it is providing as part of the UNFCCC Private Sector Initiative, a long-term project that aims to encourage businesses to contribute in a sustainable and profitable way to an effective response to climate change.

“Reducing our greenhouse gas emissions is a top priority for Nestlé, but increasingly we recognise we have a role to play in helping our suppliers adapt to the impacts of climate change too,” said Claus Conzelmann, Nestlé’s Global Head of Safety, Health and Environmental Sustainability.

“Since 2001, we have more than halved the amount of greenhouse gas emissions from our factories per tonne of product. At the same time we are helping farmers become more resilient to environmental change.

“This not only enables them to continue to grow crops and reduces the risks to our long-term supply of raw materials, but also helps to ensure food security,” he added.

“Reducing our greenhouse gas emissions is a top priority for Nestlé, but increasingly we recognise we have a role to play in helping our suppliers adapt to the impacts of climate change too.” Claus Conzelmann, Nestlé’s Global Head of Safety, Health and Environmental Sustainability.

Nestlé is the world’s leading buyer of coffee, purchasing about 780,000 tonnes a year, or 10% of the world’s supply.

As part of its efforts to safeguard coffee plantations, Nestlé trained more than 16,000 coffee farmers worldwide in 2011 in techniques to adapt to changing weather patterns such as temperature increases and limited rainfall.

The training includes how to better prepare soil and prevent erosion, responsible use of fertiliser, water conservation and how to establish community nurseries to grow young coffee plantlets.

To help farmers renew their crops, Nestlé is also propagating and distributing coffee plant varieties that produce more beans and have a greater resistance to drought and certain diseases.

In Colombia, the company distributed more than four million disease-resistant coffee plantlets to farmers in 2011 through its partnership with the Colombian Coffee Growers Association.

The plantlets are particularly resistant to leaf rust, which has had a significant impact on Colombian coffee production over the past few years as a result of increasing temperatures and excessive rainfall.

According to a recent study (4.12MB, PDF) by the International Center for Tropical Agriculture, cocoa farmers in west Africa will be greatly affected by climate change, as areas of land suitable for growing the crop are predicted to shrink considerably in certain parts of Cote d’Ivoire and Ghana by 2050.

One of the ways Nestlé is supporting cocoa farmers through its Cocoa Plan is by distributing higher-yielding, disease-resistant plantlets to improve productivity and minimise the amount of land required for farming.

Between January and October this year, the company distributed more than one million of these plants - which typically produce 50% to 200% more cocoa - to farmers worldwide.

During the same period, Nestlé also trained more than 21,000 cocoa farmers, including 9,900 in Côte d’Ivoire, in more efficient and sustainable growing techniques such as how to prune trees and ferment and dry beans more effectively.

Earlier this month, Nestlé participated in an event at the UN Climate Change Conference in Doha, Qatar to explain how it is helping farmers adapt to environmental challenges.

Worldwide, more than 680,000 farmers are part of Nestlé’s supply chain, mainly smallholders in more than 50 countries. Over the past 12 years the company has continuously increased its work with farmers in more sustainable agriculture practices. In 2011, Nestlé provided technical assistance and training to more than 200,000 farmers.

It is now the leading company in the Carbon Disclosure Project, an annual ranking (71.1KB, PDF) based on data requested from the ‘Global 500’ companies.