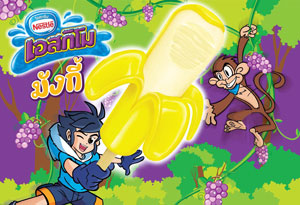 FIRST PEELABLE ICE CREAM: Television commercials of Eskimo Monkey in Thailand showed how fun it is to peel the ice cream.

Many would think that a peelable ice cream is unbelievable.

But it is now a reality and this playful eating experience can be enjoyed in the form of an innovative, fun and unusual ice cream stick, which is about to be rolled out across the globe this year, after its successful launch in Thailand as Eskimo Monkey.

Eaten like a banana, you start the playful experience by taking a bite from the top of the peelable jelly shell, which you then roll down like a banana skin to reveal a delicious ice cream core.

First launched in Thailand in May 2010 under the popular Eskimo brand, it quickly became a high-in-demand success among children. Television commercials, cartoon posters and tricycle sellers reinforcing the “peelability” feature, showed children and adults how fun it is to peel the ice cream with easy-to-understand instructions.

As well as being fun, new and exciting, it also meets the Nestlé Nutritional Foundation requirements, containing no artificial colourings, being low in fat and low in sugar. It is a healthy snack, supporting Nestlé’s Nutrition, Health and Wellness strategic drive for its products.

The launch was aligned with the Eat Smart Play Hard campaign in Thailand – with the endorsement of the Thai Ministry of Public Health – which focused on children aged between 6-12 years old to encourage more health-conscious food choices.

Hervé Cathelin, Global Head of Nestlé Ice Cream, explained the relevance of the ice cream snack and said: “When you work in ice cream you need to think like a kid. A kid wants to play, explore but most of all have fun. In Nestlé ice cream it is important to achieve our objective of developing products that not only appeal to kids, but also meet the Nestlé nutritional foundation. The peelable achieves this in a fun and playful way.”

First extended to Malaysia in January 2011 under the Matkool brand, the ice cream snack will now be available in the Philippines as Krazy Banana under the Kimy brand this month.

Then in March, the ice cream concept will also be on sale in Europe under the Pirulo brand.

And in the coming months, the roll-out will continue in several countries.