Bangkok– July 22, 2019: MILO chocolate malt beverage is increasing its focus on its sports marketing strategy with the “MILO Champions Cup,” MILO’s first global football tournament that reinforces MILO’s commitment to encouraging Thai kids to “Grow with Sport” because “Sport is A Great Teacher.” MILO, which has been supporting Thai kids through sport for decades, will send a team of eight talented young football players to represent Thailand in the MILO Champions Cup. These players will have the opportunity to become real-life champions by learning new skills during the MILO Champions Cup, which is bringing together football players from 15 countries to train with experts during the Barca Academy Program at Camp Nou, FC Barcelona, in Spain.

Mr. Chaiyong Sakulborrirug, Business Executive Officer – Dairy & Adult Nutrition, Nestlé (Thai) Ltd., said, “MILO is continuing to support Thai kids to Grow with Sport because Sport is A Great Teacher. This year, MILO has elevated our successful sports marketing strategy to a global level with the ‘MILO Champions Cup.’ This is MILO’s first global football tournament in collaboration with FC Barcelona, where young players from 15 countries around the world will develop their skills together while learning about each other’s cultures and gaining valuable life experiences. Losing or winning is not as important as encouraging the spirit of sportsmanship, understanding how practice helps them to improve, and having the positive attitude needed to become a champion, not only on the playing field, but in real life. MILO will continue to inspire Thai youth to grow with sport for their future success.”

Through its partnership with leading football club FC Barcelona, MILO is offering children 8 to 12 years old from 15 countries the opportunity to develop their football skills during the Barca Academy Program. They will learn to be more creative on the playing field and strengthen their teamwork in areas such as controlling the ball, fast kicks, and maintaining a perspective on the field. The tournament also has a special rule for granting MILO Green Cards to players who demonstrate the spirit of sportsmanship during a game, in line with MILO’s global concept that good sportsmanship is the key to becoming a good player. The MILO Champions Cup also offers opportunities for female players to join the teams, with each team requiring at least one female player on the field throughout the duration of every match. 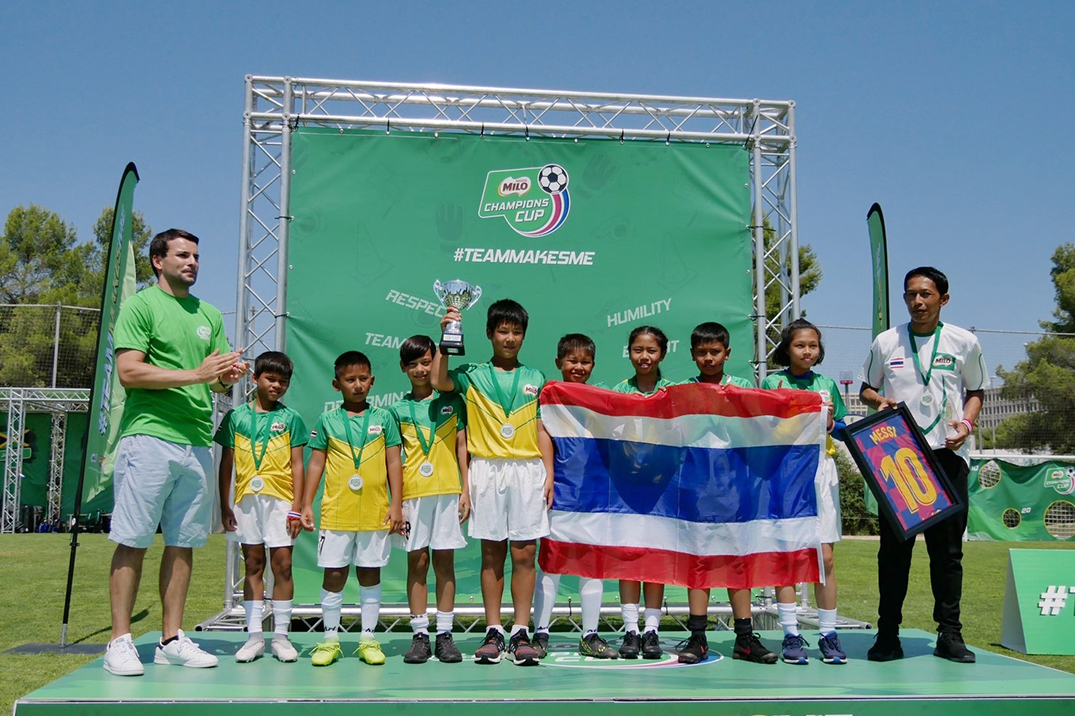 “We believe that our MILO Thailand team of eight young players will enjoy a wonderful experience at FC Barcelona, and maybe even win the MILO Champions Cup for our nation. However, our ultimate goal is to inspire Thai youth to Grow with Sport to help them become a success when they get older, which reflects the Nestlé Purpose of ‘Enhancing quality of life and contributing to a healthier future’,” concluded Mr. Chaiyong.