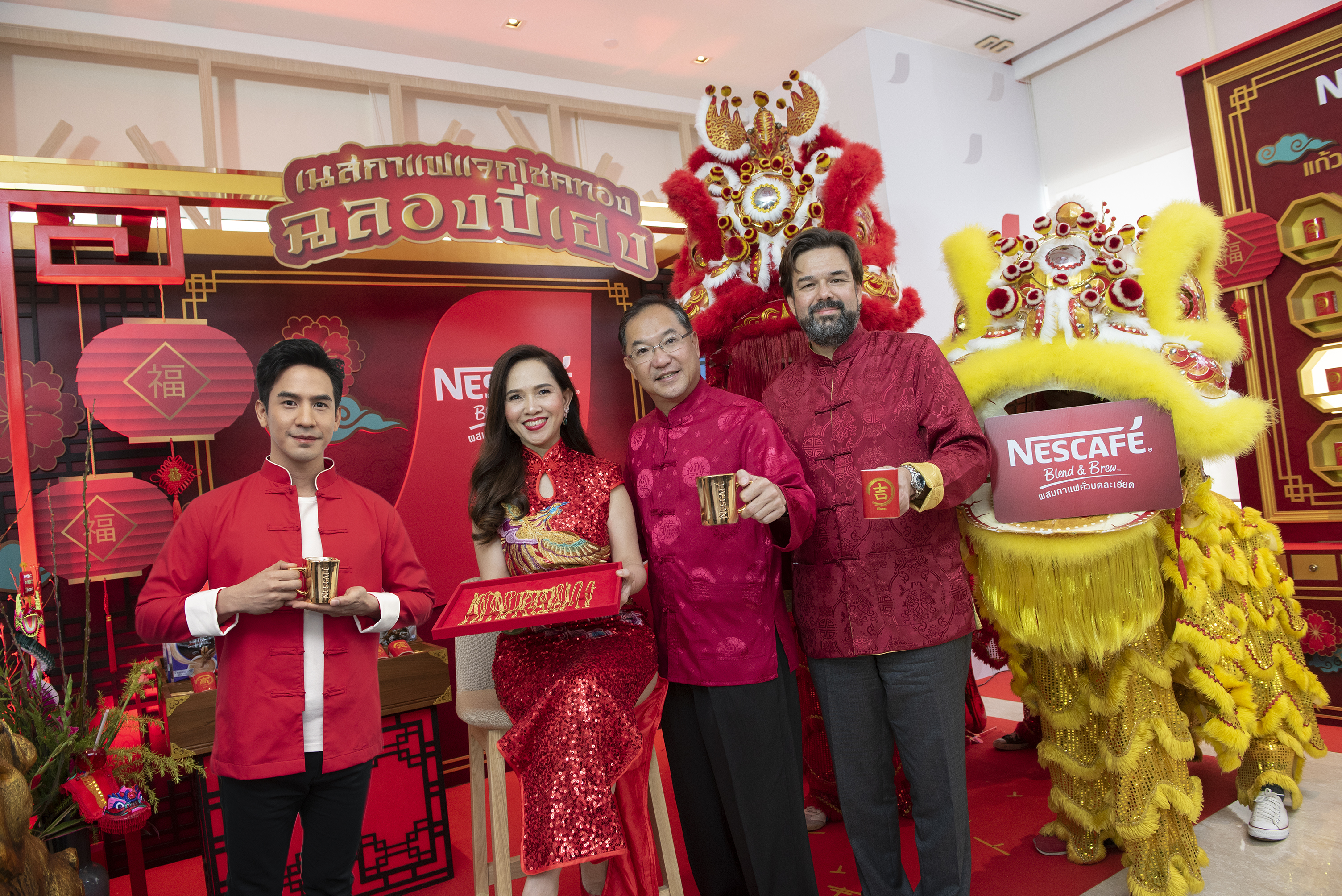 Bangkok – 31 January, 2019: NESCAFÉ BLEND & BREW Pasom Kafe Khua Bod Laiad, the leader in the 15-billion baht Thai coffee mixes market, is investing 250 million baht in its “NESCAFÉ Gives Away Gold Prizes to Celebrate an Auspicious Chinese New Year” lucky draw campaign for consumers to enjoy a more exciting Chinese New Year celebration. The campaign features two tiers of prizes – a grand prize of a golden mug worth one million baht, and a second tier of over 200 gold necklaces with gold pendants that feature an auspicious Chinese character. The campaign runs from today until 31 March, 2019.

Mr. Vladislav Andreev, Business Executive Officer – Coffee and Creamer Business Unit, Nestlé (Thai) Ltd., said, “NESCAFÉ BLEND & BREW is the biggest brand in the NESCAFÉ portfolio and holds the leadership position in the Thai coffee mixes market. This year, we are thanking coffee lovers for making us Thailand’s favourite coffee brand with the ‘NESCAFÉ Gives Away Gold Prizes to Celebrate an Auspicious Chinese New Year’ lucky draw campaign, giving them the opportunity to enjoy NESCAFÉ BLEND & BREW along with the chance to win many great prizes.”

NESCAFÉ has collaborated with Thanawat (Pope) Wattanaputi, NESCAFÉ BLEND & BREW brand ambassador, and famous fortune teller Tossapol (Morchang) Sritula in an exciting Chinese New Year campaign that offers two tiers of prizes. The first tier is a grand prize of a golden mug worth one million baht, while the second tier has prizes of 200 1-baht gold necklaces with gold pendants displaying an auspicious Chinese character, with 30 necklaces to be given away each week during the campaign.

To qualify to win the golden mug worth one million baht, or one of the gold necklaces and pendants, consumers should collect five empty sticks of NESCAFÉ BLEND & BREW or NESCAFÉ AMERICANO, write their name and address by hand on a piece of paper, and send everything together to PO Box 22, Por Nor Jor Pasicharoen, Bangkok 10160.

In addition to the fabulous golden prizes, the “NESCAFÉ BLEND & BREW Coffee House of Fortune,” a stylish and modern take on a traditional Chinese coffee house, will be open in Yaowarat to celebrate the Chinese New Year on February 5 and 6. Han, the Star and Morchang will make an exclusive appearance from 13:00 to 15:00 on Tuesday, 5 February. Consumers can also enjoy free samples of NESCAFÉ BLEND & BREW throughout the two-day event, along with special promotions and games.

The NESCAFÉ Gives Away Gold Prizes to Celebrate an Auspicious Chinese New Year lucky draw campaign is being supported by a 30-second TV commercial that features NESCAFÉ BLEND & BREW brand ambassador Pope together with Morchang. It is currently airing on leading TV stations, along with a 80-second web film on digital channels. The campaign also features in-store promotions and point-of-sale displays.

“We expect this campaign to drive NESCAFÉ BLEND & BREW as the best way to nurture stronger bonds among friends and families, especially during Chinese New Year, which will help to maintain NESCAFÉ’s position as the number one coffee brand in Thailand,” concluded Mr. Andreev.