FoSTAT-Nestlé Quiz Bowl is a quiz competition on food science and technology subject organized by the Food Science and Technology Association of Thailand (FoSTAT), for students studying in university, college and/or other higher education institution nationwide. Nestlé (Thai) Ltd., has been its main sponsor since 2003. From 16 institutes at the beginning, at present, there are as many as 60 institutions nationwide participate the event.

Nestlé as the world’s largest food company and the leader in Nutrition, Health and Wellness, has always put much emphasis on food quality and new product development, of which relies strongly on food science and academic base. Seeing that food industry development in Thailand is so important, Nestlé has pursued the quiz content to focus more on science and technology basis since the very first working with the FoSTAT.

As for benefits, Nestlé looks at over-all picture of food industry. More university students are interested in participating in the event and find it is important to their study. At the end, these students will enter into the industry. Therefore, the competition actually helps build up professional consciousness and provide good profiles for the contestants. 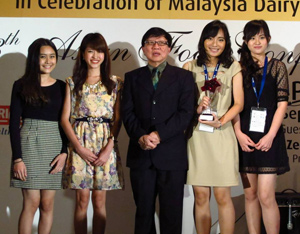 Team members receive first place trophy from Mr. Koh Boon Liang, President of SIFST
Apart from a trophy from the Privy Councilor and a scholarship, Nestlé also subsidizes a grand prize to the team winner by arranging an educational trip to Nestlé Research and Development Center in Singapore. The trip gives a great opportunity to Thai students to experience how the world’s renowned food company performs its jobs and what are things behind the success. We want to inspire the food science students that research function is very vital not less than processing or any other function. Despite the front line competition in marketing and sales, collaborations on the other side is valuable for the whole industry and the country because, finally, everyone will obtain benefits derived from this development.

On 10th September 2013, team from Department of Food Technology, Faculty of Science, Chulalongkorn University won the first place from ASEAN Food Quiz Bowl 2013, which was the part of ASEAN Food Conference 2013, organized by the Singapore Institute of Food Science & Technology (SIFST) in conjunction with the ASEAN-Committee on Science & Technology (ASEAN-COST) and the Federation of the Institute of Food Science and Technology in ASEAN (FIFSTA). The team defeated the others from Indonesia, the Philippines, Malaysia, Cambodia, Vietnam and Singapore. The first runner-up and the second runner-up was the team from the Philippines and Indonesia, respectively.